三. The lubrication system causes damage and damage to the shaft and bearing bush:

When the lubrication effect of the shaft and the bearing bush fails to meet the requirements, a variety of fault characteristics will appear. If the oil pressure is low, the part between the shaft and the bearing bush will cause dry friction due to direct contact and cause damage and damage to the moving surface. At this time, the shaft surface is blue. If the lubricating oil fails or the pressure cannot be built up, the moving surface will completely lose the protection of the oil film and directly contact for dry friction. When the temperature rises, the alloy layer of the bearing bush melts, and the phenomenon of "shrouding the bush" will occur if the machine stops in time. Failure to stop the machine in time will cause more serious damage to the parts.

Causes: The oil level is too low or the lubricating oil passage is ruptured; the oil suction filter, oil passage, and oil holes are blocked; the oil pump is worn or the suction pipe is leaking; the pressure regulating valve and pressure limiting valve are damaged; the engine idling time Too long; after the engine is started, it will directly perform high-speed operation and full-load operation without heating it up; after full-load operation, it will stop without cooling down during low-speed operation under no-load conditions when the temperature is high, which will deposit heat in the engine, The temperature rises; the standard oil is not selected and the oil is changed regularly.

2. There is water in the lubricating oil, causing damage and damage to the shaft and bearing bush:

Causes: poor sealing of cylinder liner seals, coolant seeping into the crankcase; damage to the engine oil radiator, mixing of oil and water; water entering when lubricating oil or poor sealing of the oil filler and dipstick, washing the car and water entering when it rains Crankcase; water in the fuel enters the crankcase. So before starting the engine every time, you must check the oil level and quality of the lubricating oil. This is a must.
Eric Bearing Limited provides SKF Bearing 6206-2Z, contact us to buy it. 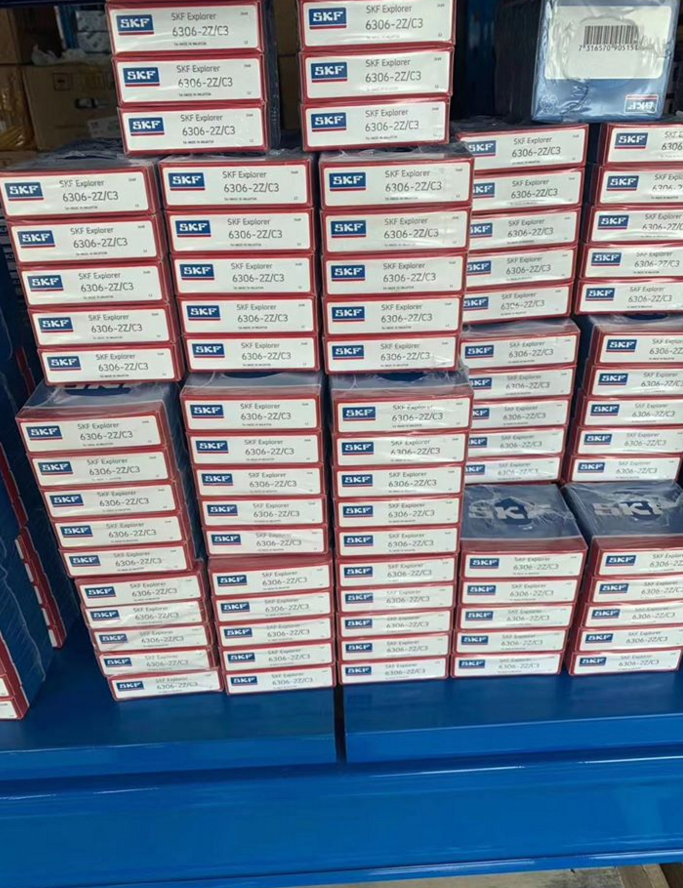 3. Shaft and bearing damage caused by fuel in the lubricating oil:

After the fuel enters the crankcase, the lubricating oil will become thinner, the oil film will become thinner, and the lubrication effect will be reduced. At the same time, it will corrode the shaft and bearing bush. The surface of the bearing alloy is black and green with slight cavitation. In particular, the by-products produced by the combustion of fuel with high sulfur content are carried into the poorly ventilated crankcase by the fuel, and the sulfuric acid produced will cause serious cavitation on the surface of the shaft.

To prevent shaft and bearing damage and damage caused by the lubrication system:

A. In the absence of manual lubrication equipment, when installing the engine, apply clean lubricating oil with the same label to the moving surface of each shaft and bearing bush. After the engine is installed, turn off the fuel switch before the first start, and use the starter to drive the engine After idling several times, when the engine oil pressure gauge shows, turn on and turn on the fuel switch, set the throttle at medium and low speed, start the engine and observe the operation.

B. After the engine has been stored for a long time, it must be started after the starter drives idling at the first start.

C. The engine must be maintained, inspected, and replaced with lubricating oil and filter elements within the specified time.

E. Avoid the engine idling for too long, and idling cannot exceed 5 minutes.

F. After starting the engine, it must go through a medium-speed heating operation, and then put it into use when the water temperature rises above 70°C.

G. After the engine has been working at full load for a long time, it cannot be stopped immediately. The engine must be turned for 15 minutes at low and medium speed without load, otherwise the internal heat will not be dissipated.
SKF Bearing 7304 BEP online, click here to learn more about it.

四. Damage and damage caused by incorrect use:

1. Damage and damage caused by long idling time: the surface alloy layer of the bearing bush is squeezed, displaced, flanged and flake-shaped.

The reason is: the engine idling for too long, the engine is running below the normal operating temperature, the fuel injected into the combustion chamber cannot be completely burned, and a part of the unburned fuel flows into the crankcase along the cylinder wall, destroying the lubricating oil The oil film reduces the lubrication effect. At the same time, the idling speed is low, and the oil supply of the oil pump is small, so it causes a slight dry friction between the bearing surface of the bearing bush and the shaft, which damages the alloy layer surface of the bearing bush, and generates wear debris at the same time to accelerate the wear of the shaft and the bearing bush. And damage. To prevent this kind of problem, it is necessary to follow the operating rules. After starting the engine, the idling speed should not exceed 5 minutes, and the idling operation of the engine should not be lower than 850 rpm.

2. Damage and damage caused by engine shutdown (shutdown) after a long time operation: the surface of the bearing bush alloy is abraded, and the uneven surface alloy shifts from the middle to the sides.

The reason is: after the engine has been working under a heavy load for a long time, the internal parts are at the highest operating temperature, especially the combustion chamber is at a high temperature. After the engine stops running, the cooling system and lubrication system stop working, and the heat cannot be dissipated. Increase the temperature of the relevant parts and destroy the oil film on each lubricating surface. When restarting, when the oil desert on each lubricating surface has not yet formed, abnormal wear of the bearing bush has occurred. In particular, the damage to the sliding bearing of the turbocharger is more serious. At the same time, too high temperature will cause the deformation of the shaft hole, destroying the operation accuracy and accelerating the damage of the engine. The occurrence of this phenomenon will cause serious damage to the piston, cylinder liner and cylinder liner sealing ring. Therefore, after the engine has been working for a long time with a heavy load, the engine should be operated for more than 10 minutes at no-load, medium and low speed, and the internal temperature is reduced before stopping.

3. Damage or damage to the bearing bush directly after the engine is started up to high-speed operation and full-load operation: the seventh and sixth main bearings of the engine are severely worn, and the other bearings are damaged.

The reason is: after the engine is started, no-load heating operation is performed, and it is put into high-speed operation and full-load operation. Because when the engine does not meet the operating temperature requirements, the force contact surfaces and operating gaps of each part are not in the best state, and the low-temperature lubricating oil has poor fluidity, and the heat on each moving surface cannot be quickly taken away by the lubricating oil. Cause damage or damage to the bearing bush. The lower the outside temperature, the more serious the damage to the bearing bush. To prevent this kind of problem, it is necessary to carry out warm-up operation according to the regulations. After the engine is started, it shall be operated at medium and low speeds. The engine can only be put into operation when the water temperature rises above 70°C.

The reason is: if the axial clearance of the crankshaft is too large or too small, it will cause damage to the crankshaft thrust bearing. In the course of use, a large axial gap produces an impact, and a small axial gap temperature rise will cause abnormal wear and cause damage to the seventh main bearing. To prevent this kind of problem, it is necessary to ensure that the axial clearance of the crankshaft is within the standard range of 0.18 to 0.35 mm when the engine is installed.

Since its establishment more than ten years ago, Eric Bearing Limited has been specialized in the export of brand bearings. Our products can be seen in more than 50 countries and regions around the world. Thank you so many customers for choosing our products. Your support has given us the motivation to move forward, and we are also looking forward to establishing cooperative relations with more companies.