2. The damage caused by surface reaction and other aspects is 15%;

From this statistical proportion, we can see that the damage to the bearing caused by cleanliness is the main reason. Preventing damage due to poor cleanliness is multifaceted: ensuring the cleanliness of parts during engine assembly is only one aspect, on the other hand, the engine is in use. The surface alloy layer of the main bearing and connecting rod bearing in the engine is the softest, bearing the largest load, and the most vulnerable to damage. Therefore, the surface damage phenomenon of the main bearing and connecting rod bearing will be analyzed below to avoid repeated failures after repair.Need SKF Bearing 618/8, contact us without delay. 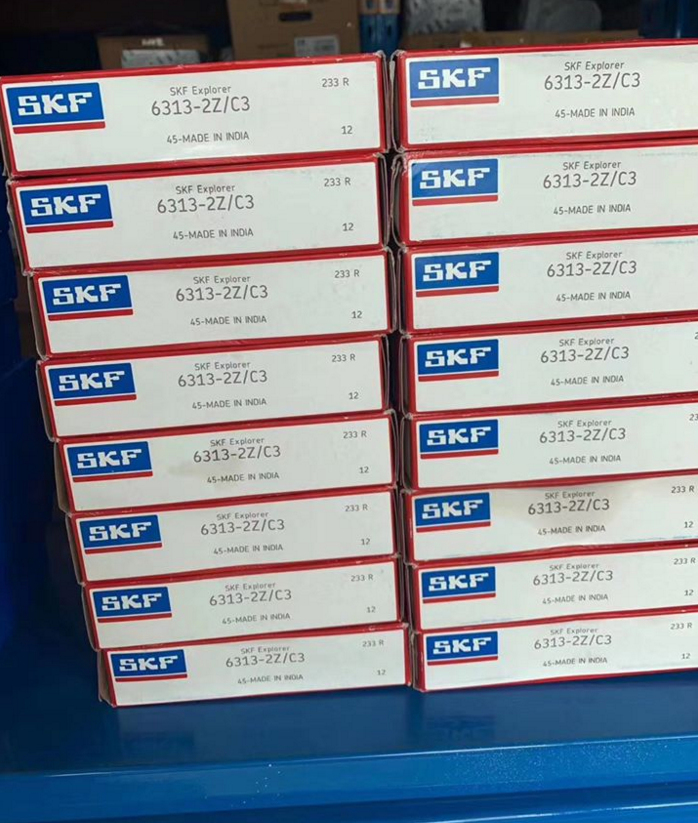 1) Abrasion caused by small foreign matter to the bearing bush:

When the oil filter element neutralizes the oil drain plug of the engine oil pan, the first tens of milliliters of engine oil that flows out contains a lot of alloy powder that can be seen directly by the naked eye, and the bearing bush has been worn. This is caused by small particles of impurities entering the moving surface of the bearing alloy layer. Although it did not cause serious damage to the bearing, if this phenomenon continues, not only the bearing will be damaged early, but the shaft will also be severely damaged, so it must Eliminate timely according to the cause of the fault to avoid damage to the parts.

Reasons for the entry of small particles: First, the air filter has a poor filtering effect or the air intake system is not well-sealed. It is necessary to check the various pipes and connections of the air intake system for cracks and looseness. At the same time, check whether the filter element is loose or not. Whether the paper core is broken. Whether it is repairing or maintaining the entire intake system, the inspection is very important, and reliability must be ensured. Second, after the lubricating oil is contaminated, it is added to the engine or the oil and the filter element is used for too long. All the filter elements of the machine are blocked, so that the oil on each lubricating surface enters the filter element directly without filtering. The third is that the fuel supply is too large to burn and the nozzle leaks, causing fuel to seep into the crankcase. At the same time, some impurities enter the crankcase with the fuel and mix with the oil to reduce the lubrication effect. When repairing and maintaining the engine, you must pay attention to the cleanliness of the parts, prevent re-contamination during installation, and ensure the internal cleanliness after installation.

When alloy blocks or flakes with larger particles are found in the oil filter element and the engine oil pan, the shaft and the bearing bush have been severely damaged. It must be shut down immediately for inspection and repair. If it continues to be used, more parts will be damaged.

Reasons for the entry of larger particles: the parts are not cleaned during installation, such as metal chips generated when machining the inner hole of the connecting rod bushing are stored in the connecting rod oil passage, cutting or silt is stuck in the parts and oil passage, and the bearing bush is stuck when installing Larger foreign matter or the surface of the shaft is scratched. These phenomena cause serious damage to the bearing bush. Therefore, it is necessary to carefully clean, clean and inspect during maintenance and installation.

The lubrication and heat dissipation effects of inferior lubricating oil are not up to the requirements, which intensifies the wear of the bearing bush and the shaft. The high temperature of the moving surface causes the alloy of the bearing shell to melt and damage. At the same time, there are more impurities in the inferior lubricating oil. The oil filter element is quickly blocked and contains Impurity lubricating oil directly enters the moving surface without being filtered, further accelerating the damage of the shaft and bearing bush.Eric Bearing Limited provides SKF Bearing 6002-2Z, click here for more information.

2. The phenomenon of bearing damage or damage caused by incorrect installation:

1) The single-sided wear of individual bearing bushes is serious, and the alloy surface of the bushing is abraded.

The reason is: the deformation of the bearing bush hole is tapered; the crankshaft is bent (the reasons for the crankshaft bending are: uneven running clearance, vibration caused by severe wear or damage of related parts, and failure of the balance shock absorber. The failure of the balance shock absorber can also cause the crankshaft to break ); When the bearing is installed, the positioning part is not aligned or reversed: the upper and lower tiles are misaligned and the oil holes are not unblocked.