Before we configure, we must understand some points related to SKF bearings:

1. The expansion and contraction of the shaft caused by temperature changes.

2. The SKF bearing is easy to install and disassemble.

3. The tilt of the inner and outer rings due to shaft deflection and installation errors.

4. The reading and preloading method of the entire rotating system including bearings.

5. Bear and transfer the load at the most suitable position.

Contact us for more information about SKF Bearing 6308/VA201. 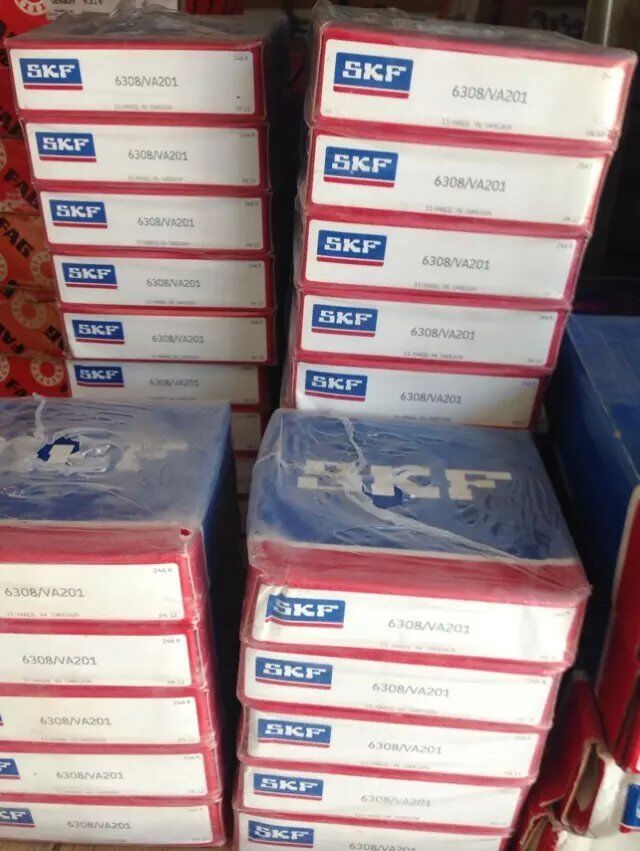 1. The two pivots are fixed in one direction

This configuration is to allow each fulcrum to axially fix the shaft system in one direction. The shortcomings are: because the two fulcrums are fixed by the bearing cover, so when the shaft is heated and elongated, it will inevitably cause the bearing to be subjected to an additional load and affect the service life. Therefore, this form is only suitable for occasions where the working temperature rise is not high and the shaft is short (span L≤400mm). For deep groove ball bearings, an axial gap C should also be left between the outer ring of the bearing and the bearing cover, and C = 0.2 ~ 0.4 mm should be taken to compensate for the thermal elongation of the shaft. Because the gap is small, it can not be drawn on the drawing. For angular contact bearings, the thermal compensation gap is guaranteed by the internal clearance of the bearing.

2. One point is fixed in both directions, the other point moves

For a fixed fulcrum, deep groove ball bearings can be used when the axial force is not large, and the left and right sides of the outer ring are fixed. The upper half of the figure is fixed by the shoulder of the bearing housing hole. This structure prevents the housing hole from being boring at one time, affecting the processing efficiency and coaxiality. When the axial force is small, the outer ring can be fixed by the elastic ring, as shown in the lower part of the figure. In order to withstand the axial force to the right, the inner ring of the fixed fulcrum must also be axially fixed. For the floating fulcrum, deep groove ball bearings are often used, and cylindrical roller bearings can also be used when the radial force is large, as shown in the lower part of the figure. When using deep groove ball bearings, there is a large gap between the outer ring of the bearing and the bearing cover, so that the shaft can be freely extended when thermally expanded, but the inner ring needs to be fixed axially to prevent the bearing from loosening. When the cylindrical fulcrum is used as the fulcrum, because the inner and outer rings can move relatively in the axial direction, the inner and outer rings should be fixed axially to avoid excessive displacement of the outer ring. When designing, it should be noted that there is no unnecessary or insufficient axial fixation of the inner and outer rings of the bearing.

The fixed fulcrum adopts two angular contact bearings arranged symmetrically, respectively bears the axial force in the left and right directions, and jointly bears the radial force, which is suitable for the occasion with large axial load. In order to facilitate assembly adjustment, the fixed fulcrum adopts the sleeve structure. At this time, when selecting the size of the floating fulcrum bearing, the outer diameter of the bearing and the outer diameter of the sleeve should generally be equal to facilitate the processing of the two bearing seat holes.

3. Swimming support at both ends