The Popular Types Of Mechanical Bearings

As we know that a mechanical bearing is a component used between two parts that allows rotational or liner movement, reducing friction and enhancing performance to save energy.

Both metal and plastic bearings can be found everywhere, from refrigerators to computers to the 100 or so bearings found in your car. The concept behind them is a simple one: things roll better than they slide. Without bearings, the wheels in your car would rattle, the transmission gear teeth wouldn’t be able to mesh, and the car wouldn’t run smoothly. They are composed of a smooth inner and outer metal surface for metal balls to roll against. The balls or rollers help “bear” the load and the device functions more efficiently.

There are many different types of bearings, each used for specific purposes and designed to carry specific types of loads, radial or thrust. Here, we’ll look at the 6 most popular types: plain bearings, rolling element bearings, jewel bearings, fluid bearings, magnetic bearings, and flexure bearings.

Plain bearings are the simplest type of bearing and are composed of just the bearing surface with no rolling elements. They have a high load-carrying capacity, are generally the least expensive and, depending on the materials, have much longer lives than other types.

Rolling element bearings place balls or rollers between two rings – or “races” – that allows motion with little rolling resistance and sliding. These bearings include ball bearings and roller bearings.

Ball bearings are the most common type of rolling element bearing. These bearings can handle both radial and thrust loads but are usually used where the load is relatively small. Because of its structure, there is not a lot of contact with the balls on the inner and outer races.  If the bearing is overloaded the balls would deform and ruin the bearing. Roller bearings are able to handle a much heavier, radial load, like conveyor belts, because they don’t use balls. Instead, they have cylinders allowing more contact between the races, spreading the load out over a larger area. However this type of bearing is not designed to handle much thrust loading.Contact us for more information about SKF 7016 CD/P4A. 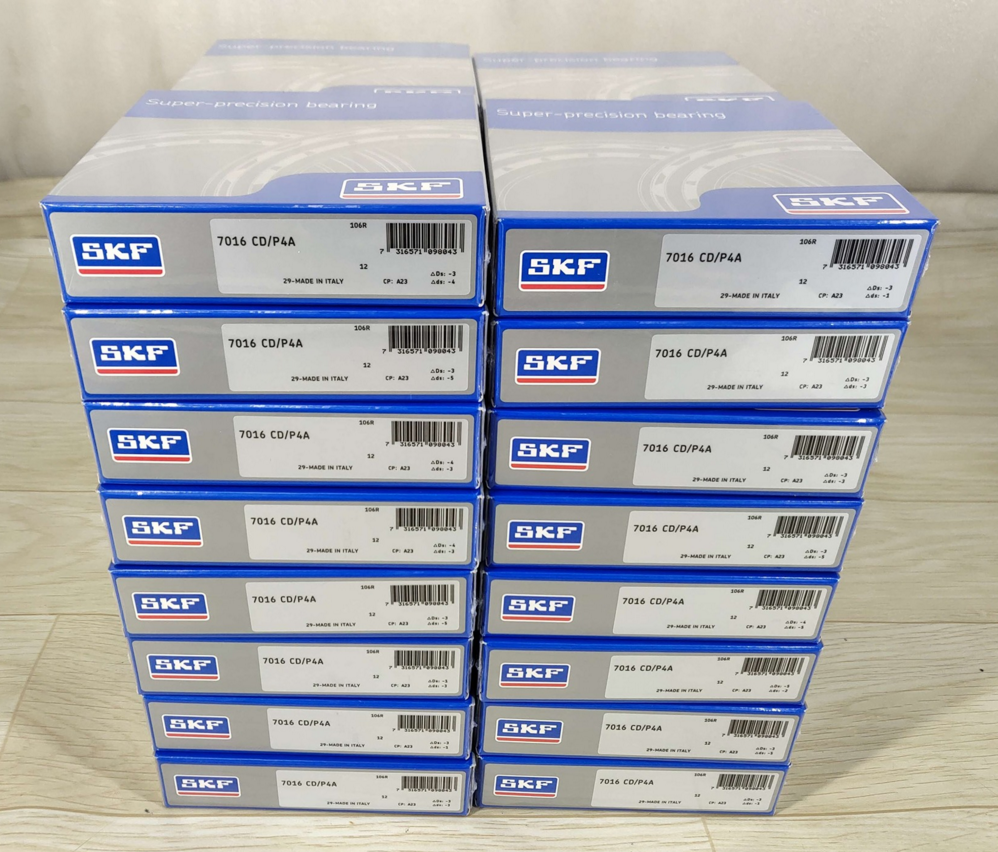 Jewel bearings are plain bearings with a metal spindle that turns in a jewel-lined pivot hole. They carry loads by rolling the axle slightly off-center and are usually used in mechanical watches or clocks. This is due to their low and predictable friction that improves watch accuracy.

Fluid bearings are used in high load, high speed or high precision applications that ordinary ball bearings either couldn’t handle or would suffer from increased vibration and noise.

Magnetic bearings support moving parts without physical contact, instead relying on magnetic fields to carry the loads. They require continuous power input to keep the load stable, thus requiring a back-up bearing in the case of power or control system failure.

Magnetic bearings have very low and predictable friction and the ability to run without lubrication or in a vacuum. They are increasingly used in industrial machines like turbines, motors, and generators.

A typical flexure bearing is one part joining two others, like a hinge, in which motion is supported by a load element that bends. These bearings require repeated bending, so material selection is key. Some materials fail after repeated bending, even at low loads, but with the right materials and bearing design the flexure bearing can have an indefinite life. Another notable characteristic of this bearing is its resistance to fatigue. Many other bearings that rely on balls or rollers can fatigue as the rolling elements flatten against each other.

Our company has more than ten years of experience in bearings exporting. The products are exported to more than 50 countries in the world and have won wide acclaim from customers. We are very willing to establish cooperative relations with you in the future. Welcome to contact us.