The Form And Cause Of FAG Bearing Damage

1. The main reasons for FAG Bearing Damage are:

2. The beginning of FAG bearing damage:

The length of time from the beginning of use of the bearing to the appearance of the first material fatigue point is related to the number of revolutions, load size, lubrication and cleanliness of the bearing during this period. Fatigue is the result of the periodic appearance of shear stress under the loaded surface. After a period of time, tiny cracks will be initiated and then gradually extend to the surface. When the rolling element passes through the small area formed by these cracks, some cracks begin to fall off, forming the so-called peeling phenomenon. As the peeling continues to expand, the bearing is damaged and cannot be used. Initially occurs under the surface. Although the initial peeling is usually very slight, as the stress increases and cracks increase, the peeling area spreads. This process usually lasts for a long time with obvious vibration and noise. Therefore, there should be enough time to replace it before it is broken.

Generally, after the bearing has been running for a period of time, there will be obvious stress marks on the working surface. Not all the marks indicate that the bearing is broken. The bearing will also leave stress marks when used under normal conditions.

The bearing runs under load, and the contact surface of its raceway is dull and black in appearance. But this does not mean that it is abrasion, and it has nothing to do with life. The trace structure of this black hair

It becomes a force trace of the bearing. This trace varies with its operation and load conditions, and its appearance varies. Careful inspection can help us determine whether the bearing is operating under normal conditions.

Radial bearings, ball bearings, spherical surfaces, and double-row balls only bear radial force and can bear a small amount of axial load. Often the damage is caused by excessive axial force.FAG Bearing 6004.2RSR online, click here if you need it. 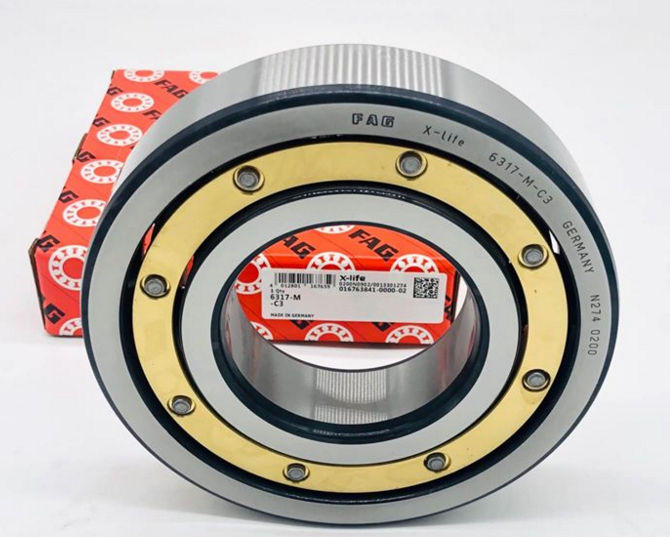 Keep it clean during installation, use new grease, and check whether the seal is intact.

The abrasion of the surface is mirror-like, and the color is blue or brown. This situation is caused by insufficient lubrication. The lubrication condition should be improved and the lubrication period and oil seal should be re-determined.

The working surfaces of the inner and outer rings have dents with a pitch equal to the distance between the rollers. The reason is that it is not knocked on the correct ring during installation, or it is pushed too far on the conical shaft, or the load is overloaded in a static state.

5) Scratches on the roller end

The roller end surface rubs against the guide ribs, causing nicks and discoloration. This situation is caused by sliding under excessive axial load or insufficient lubrication. For this type of damage, a lubricant with a higher viscosity can be selected.

6) Abrasion of roller and raceway

At the beginning of the load zone of the raceway, there is abrasion and partial discoloration with the roller, which is caused by the sudden acceleration of the roller entering the load zone. There are two possible ways: one is to choose a higher viscosity lubricant; the other is to reduce the bearing clearance.

7) Abrasion on the outer surface

The inner hole of the inner ring and the outer surface of the outer ring have nicks and partial discoloration, which is caused by the relative movement of the ring and the shaft or the bearing housing.

The only solution is to increase the interference between the ring and the shaft or bearing box to prevent mutual rotation. Axial braking or clamping cannot solve such problems.

Small and shallow pit marks on the surface of raceway, rolling element or large end face are crystalline and strong. This is due to poor lubrication. For example; less oil or viscosity change caused by temperature rise, so that the oil film cannot separate the contact surface, and the surface has instant contact. Method: Improve lubrication.

This phenomenon occurs when there is relative movement between the bearing ring and the shaft or the bearing box. This is due to a too loose fit or deformation of the bearing seat.

11) Spalling at symmetrical positions on the raceway surface

In the two rings, there are obvious stress marks at radially symmetrical positions of the rings, and the skin peels off. This is due to the deformation and elliptical compression of the bearing box. The bearing box is remanufactured.

The force traces are obvious, and the skin of one side of the ring or a raceway of the double-row bearing is peeled off.

c. The non-fixed bearing is stuck or the reserved axial displacement is insufficient.

The surface of the raceway is peeled off, and there are marks equal to the distance between the rollers. This kind of bearing is excessively loaded at rest caused by incorrect installation. Other minor impressions may be foreign matter brought in during installation or foreign matter in the lubricant.

This crack is a cracked gap, usually only on one side. This is due to the brutal beating that transmits force to the end face of the ring through the rolling elements to form an impact force. Do not strike the bearing ring directly.

The crack passes through the full section. This is caused by too large interference fit of the inner ring of the bearing or excessive advancement on the conical shaft.

Eric Bearing Limited has more than ten years of experience in bearing export. The products are exported to more than 50 countries and regions in the world. The quality of the products is very good and the price is competitive. Most customers choose our products. Looking forward to cooperating with you in the future.