A practical method for condition monitoring and fault diagnosis of NTN imported bearings is vibration analysis.

It is necessary to pay attention to the accuracy and truth of the collected signal, and to choose the location of the measuring point and the collection method in practice. To truly and accurately reflect the vibration state of NTN imported bearings. Therefore, the measuring point should be arranged at the place closest to the bearing. Generally, the free end of the motor has a rear fan cover, and the measuring point is selected at the fixed screw of the fan cover for better monitoring effect. In addition, it is necessary to pay attention to collecting and analyzing the vibration signal many times, and then comprehensively compare it to get an accurate conclusion.

NTN imported bearings showed strong regularity during their use, which was discovered during temporary production status monitoring. And the repeatability is very good. The vibration and noise of normal high-quality bearings are relatively small at the beginning of use, but the frequency spectrum is somewhat scattered and the amplitude is small, which may be caused by some defects in the manufacturing process, such as surface burrs.

The vibration and noise are maintained at a certain level after a period of exercise. The frequency spectrum is very single, with only one or two octave frequencies. There is rarely a frequency spectrum above three times the power frequency, and the bearing state is very stable, entering a stable working period.

Bearing vibration and noise began to increase and entered the later stage of use after continued operation. Sometimes there are abnormal noises, but the increase in vibration changes slowly. At this time, the kurtosis value of the bearing suddenly reaches a certain value, and the bearing is considered to be an initial failure at this time.

The larger the equipment capacity, the time for the bearing to show the characteristics of late failure to the occurrence of serious failure (usually bearing damage such as shaft holding, burns, spalling of the sand frame, raceway, bead wear, etc.) will not exceed one week. The faster the speed, the shorter the interval time. Therefore, in the actual fault diagnosis of NTN imported bearings, once the late fault characteristics are found, the bearing should be determined decisively and repaired as soon as possible.
Click here for more information about NTN Bearing 6309ZZCM. 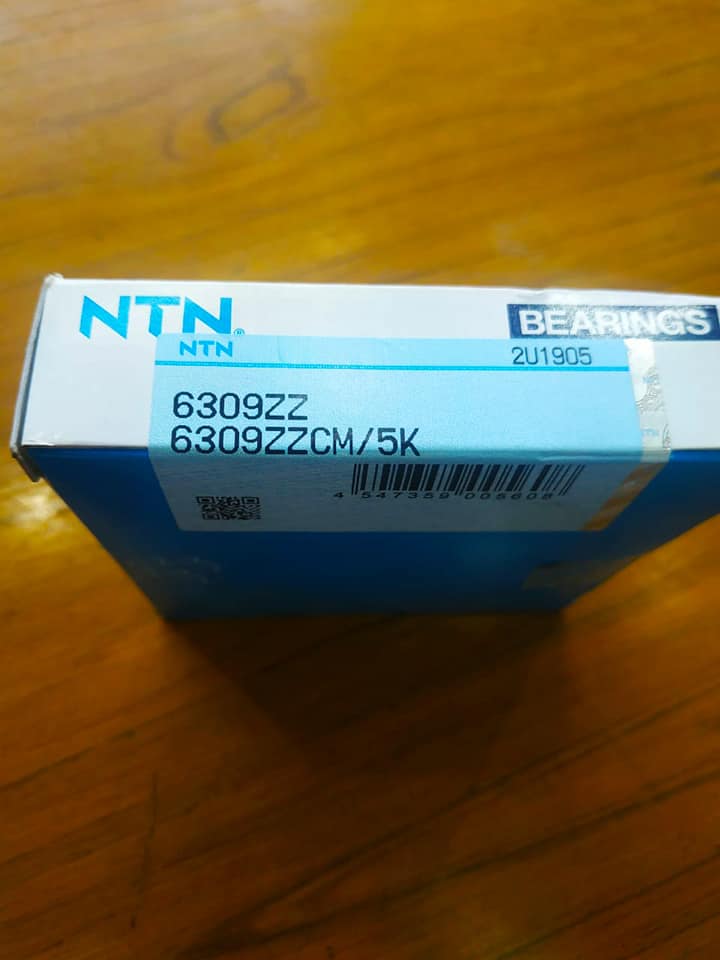 The serious failures caused by these mobile bearings are often sudden and catastrophic, such as the sudden fracture of the bearing holder, the sudden burning and fracture of the inner and outer rings of the bearing, etc. Now it is inevitable that fake and inferior bearings will enter enterprises and equipment. These faults will cause the rotor to hold the shaft, and the severe ones will cause the rotor or equipment to be scrapped. I have often encountered such situations in practice in recent years. Therefore, in actual monitoring and diagnosis, it is necessary to diagnose the condition of NTN imported bearings as soon as possible, and replace fake and inferior bearings in time to prevent major accidents. In a large number of such accidents, some practical skills have also been accumulated, which is to monitor the vibration state of such bearings in the early stage of operation after the installation, and perform spectrum analysis. It is found that the frequency spectrum of the bearing in the early stage of operation has its own unique characteristics, that is, the equipment power frequency generally does not account for the main component. However, the total value of vibration is not large, and the vibration standard is used to judge that the vibration is qualified.

It is necessary to pay more attention to accumulate the frequency spectrum and vibration time domain conditions of the normal operation of high-quality bearings on the equipment, and to diagnose the faults of these counterfeit and inferior bearings. It is convenient to judge the bearing failure in time when such abnormal spectrum occurs, and prevent equipment accidents.

Often only need to judge the quality of NTN imported bearings, the actual condition is being monitored. How long can it be used, and it is often not practical to diagnose a certain part of the bearing failure in precise analysis and diagnosis. Due to the influence of working conditions and other factors, the precise diagnosis in practice often fails to find the characteristic frequency corresponding to the NTN imported bearing. Although the wavelet analysis and fast common vibration demodulation analysis techniques developed in recent years are more accurate, they require a lot of equipment investment, and more analysis is needed. On-site fault diagnosis personnel generally use less. In practical diagnosis, the combination of dimensional parameters and non-dimensional parameters is used to diagnose fast bearing faults, that is, the frequency vibration speed in frequency spectrum analysis is used in combination with bearing kurtosis value for comprehensive diagnosis. When both conditions exceed the specification, it is judged that the bearing is faulty.

It proves that the fault diagnosis of NTN imported bearings is a very practical judgment fast and accurate. This judgment method has been practiced for three years. The accuracy rate exceeds 90%. The bearings diagnosed are basically in the later stage of failure and have very good economic benefits.