Mainly observe whether the rivet head is offset, skewed, loose, lack of meat, or whether the "double eyelid" welding position is correct, and the riveting or welding quality of the frame is maintained. The welding point is too large or too small, and whether it is caused by weak welding or excessive welding The phenomenon of jamming rolling elements. The above items are the important parts of the inspection of SKF bearings, except for the above inspections.

To judge whether it meets the specifications I require. Let me share with you those parts that I should check. The inspection of SKF bearings should be carried out under astigmatism, the appearance of SKF imported bearings. Carefully observe the appearance and cracks of the bearing. Such as abrasions, various mechanical scars. Scratches, crushing, bruising, etc. will cause the SKF bearing device to be defective, causing eccentric load and stress concentration, resulting in a decrease in rotation accuracy and service life.

The latter two are defects that tend to store moisture and dirt, rust, black skin and pitting. Easiest to develop into rust. Corrosion is a source of pollution that causes poor equipment, early wear and fatigue. Severe corrosion will cause the bearing to be scrapped. Such as raw material cracks, various cracks. Forging cracks, heat treatment cracks and grinding cracks, etc., these cracks will become a source of stress concentration and rapidly expand during the operation of the bearing, causing the bearing to rupture, and have a great impact on the life and working safety of SKF imported bearings. In fact, for important-purpose bearings, the bearing factory has performed 100% magnetic or radiographic inspection on its component parts.

The parts of these two defects are not firmly bonded to the base metal, peeling and folding. Moreover, there are often different levels of decarburization or carbon-lean phenomena around it, and the materials are easy to collapse, dent or wear, which is very detrimental to the life and accuracy of SKF bearings. Click here to learn more about SKF Bearing 22205 E. 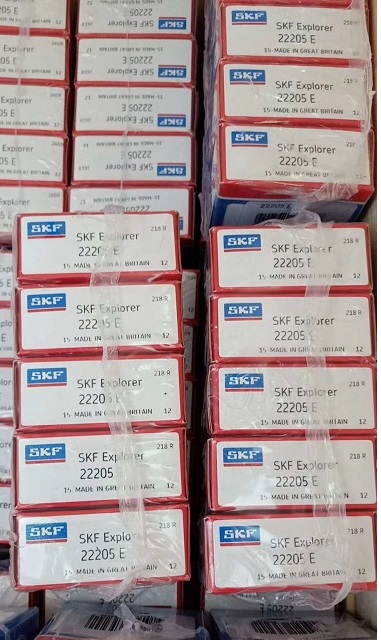 In addition to the items that should be paid attention to when checking SKF bearings, in the process of bearing use, we should also pay attention to the damage state of the bearing and replace it in time to avoid greater losses.

In severe cases, metal peeling and large-area messy scratches occur on the contact surface; in general, SKF bearing mechanical damage refers to the appearance of different levels of groove marks on the alloy surface of the bearing bush. Both contact surface damage and ablation are the main reason for bearing mechanical damage because it is difficult to form an oil film or the oil film is severely damaged.

The outer surface layer undergoes plastic deformation and cold work hardening, and SKF bearings are repeatedly affected by the cylinder pressure impact load. Locally lose the ability to deform, gradually form grains and continue to expand, and then as the wear debris falls off, the loaded outer surface layer forms cavities. Generally, when cavitation occurs in the bearing bush, pits appear first, and then this pit gradually expands and causes cracks at the interface of the alloy layer, and the cracks expand along the parallel direction of the interface until they peel off. The main cause of bearing cavitation is the sudden change of the cross-section of the structural elements such as the oil groove and the oil hole, which causes strong turbulence in the oil flow. The turbulent vacuum zone of the oil flow forms bubbles, and then the pressure rises and the bubbles collapse and cause cavitation. Cavitation generally occurs in the high-load area of ​​the bearing, such as the lower bush of the crankshaft main bearing.

Due to the overload of the engine, the fatigue pitting of SKF bearings refers to the fact that the bearing is overheated and the bearing gap is too large, causing fatigue damage, fatigue pitting or fatigue loss in the middle of the bearing. This kind of damage is mostly caused by overloading, excessive bearing clearance, or dirty lubricating oil and foreign matter mixed in it. Therefore, when using, you should pay attention to prevent the bearing from overloading and do not run at too low or too high speed; adjust the engine to a stable state when idling; ensure the normal bearing clearance to prevent the engine speed from being too high or too low; check and adjust the cooling The working condition of the system ensures that the working temperature of the engine is appropriate.

Eric Bearing Limited has over 10 years' exporting experience. Our products are exported to more than 100 countries and regions around the world. They have been widely praised by customers. Customers are also very willing to cooperate with us. And established a long-term cooperative relationship with us. In the future, we hope to cooperate with more and more customers. Bring our products to more customers in need.
Pre：Failure And Analysis Of SKF Bearings
Next：Quality Judgment Of FAG Bearings