It needs the capacity, speed, and other conditions to set the reasonable use of the bearing preload to ensure the life of the transmission. If the pre-tightening force is too large, power consumption may even lead to overheating. If the preload is too small, the body load, shaft rolling, and the gap between the outer ring will produce beating, running, and transmission accuracy to reduce noise increase, affecting gear meshing, and severe damage to teeth and bearings.

According to different NTN bearing assembly, such as: the bearing pre-tightening nut rotates directly by axially compressing the inner bearing inner ring, the inner and outer ring, to eliminate the gap and realize the purpose of bearing pre-tightening force. At present, the realization of common use: first, far more than the pre-installed bearing, the nut at the end, and then back 1/4 turn. Assembling method, the advantages of this method are low investment, simplicity, practicality, and consistent quality of tapered roller bearings. It can be used.

It works smoothly, reliably, and without noise under sliding friction. The sliding bearing of the lubricant on the liquid surface does not directly contact the separated lubrication conditions, which can also greatly reduce the surface friction loss and wear. The film also has a certain shock absorption capacity. NTN bearings are widely used, and the problem of bearing failures:

4. The strain on the surface of NTN bearing: ferrograph cutting abrasives, composed of non-ferrous metals.

5. Micro-motion of tile back: spectrum analysis found abnormal level of iron, iron spectrum, there are many wear particles with iron content in submicron, water-in-oil and acid abnormalities.

In fact, in most applications, NTN bearings often bear radial and axial loads at the same time. Therefore, when calculating the bearing life, the actual load must be converted into an equivalent dynamic load consistent with the load precondition of the rated dynamic load. If the temperature is too high, the bearing will anneal and reduce the mechanical performance of the NTN bearing; if the temperature is too low, the thermal expansion value is not enough and it is difficult to assemble. The radial equivalent dynamic load refers to a constant radial load.

There are two most common ways to replace bearings: one is to directly heat NTN bearings with acetylene oxygen vapor; the other is to use oil immersion heating for small bearings to achieve thermal expansion and expand the inner diameter of the bearing for assembly. These methods have been widely used in long-term equipment maintenance, basically satisfying and solving the bearing assembly problem in equipment maintenance. The axial equivalent dynamic load is a constant central axial load. Under this load, the dynamic elastic bearing has the same life as the actual load. But these two methods are difficult to determine whether the temperature value of the heated area of the bearing is average during the heating process. Because the traditional acetylene oxygen vapor heating is a single-air nozzle, and the heating process is only based on experience, it is difficult to know how high the temperature of the heated bearing is appropriate. In equipment repairs, the repairers sometimes have to take down the NTN bearings and install them again due to insufficient heating of the bearings, which increases the labor intensity.
Click here for more details about NTN Bearing 4T-HM803112. 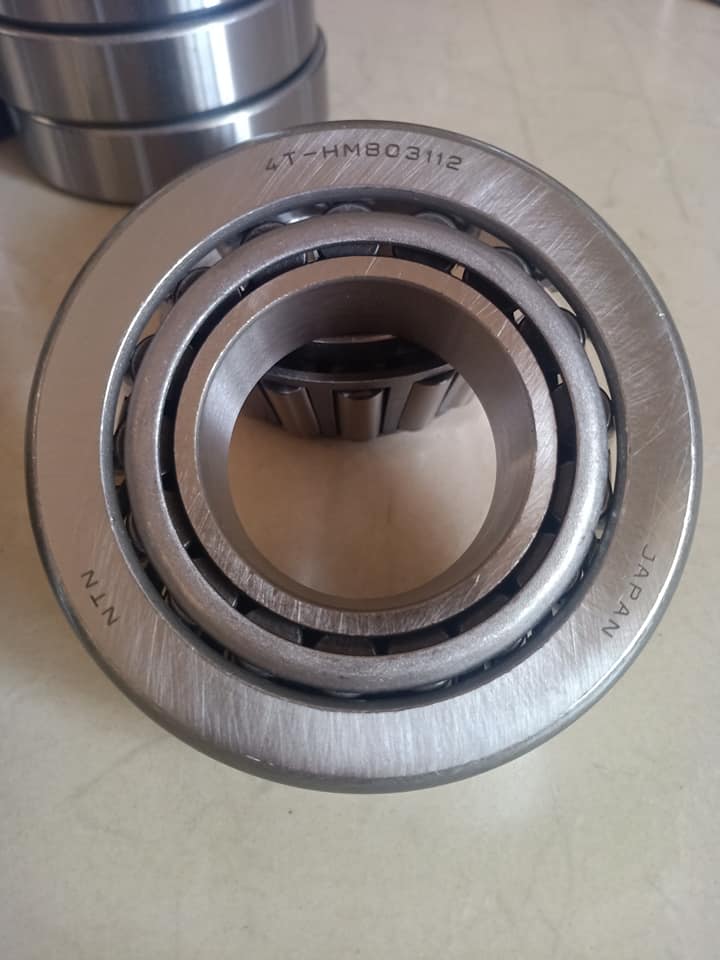 1. Minimize the intake of oil vapor.

(2) Oil tanks, fuel tanks, pipelines, oil pumps and refueling equipment should be kept tight and leak-proof. If leakage is found, it should be repaired in time, and the leaked oil should be thoroughly collected and removed. NTN bearings should prevent the oil from generating steam and aggravating it. Air pollution in the work area.

(3) When working in light oil tanks or ship oil tanks, manholes must be opened for ventilation, and anti-virus equipment with ventilation devices must be worn, and safety belts and signal ropes must be fitted. During operation, there must be a special person on duty outside the tank so that they can contact the operators in the tank at any time and rotate operations.

(4) When cleaning the remaining oil in steam, kerosene, oil tanks, automobiles and other small containers, workers are strictly prohibited from entering the tank for operation. Effective safety measures should be taken when cleaning other remaining oil must enter the tank.

(5) When performing light oil operations, the operator must stand at the upwind position to minimize oil vapor inhalation.

(6) In the oil quality adjustment work site, an exhaust device should be installed to avoid generating a large amount of oil vapor during the heating and mixing process, which would endanger the health of the operator.

2. Avoid contact with oils in the mouth and skin.

(1) It is strictly forbidden to suck leaded gasoline or other oil by mouth. If NTN bearings must be sucked out of the gasoline tank through a hose, rubber balls or suction equipment can be used to suck.

(2) After the work is finished, wash your hands with alkaline water or soap. Do not smoke, drink or eat without washing your hands, face, or mouthwash.

(3) It is strictly forbidden to use leaded gasoline to wash hands, scrub clothes, machinery, fill lighters or use as blowtorch fuel.

(4) Do not put work clothes, gloves, shoes and garters stained with oil and grease in the canteen and dormitory. They should be placed in the designated changing room and cleaned regularly.