Due to the inaccurate measurement of the shaft diameter and the size of the bearing seat hole or the mating surface roughness does not meet the standard requirements, excessive interference fit is caused, and the nsk bearing seat ring is greatly squeezed, which causes the radial clearance of the bearing itself to decrease , Make the bearing difficult to rotate, heat up, wear aggravated or stuck, and in severe cases, it will cause the inner and outer races of the bearing to crack during installation. The non-rotating seat ring often adopts a fit with little clearance or interference. In this way, the non-rotating seat ring may produce a small creep, and the contact surface of the seat ring and the rolling element is constantly replaced, and the raceway of the seat ring wears evenly. At the same time, it can also eliminate the phenomenon of axial jamming of the rolling elements in the bearing due to thermal elongation of the shaft. However, an excessive clearance fit will cause the non-rotating race to rotate with the rolling elements, causing serious wear on the shaft (or bearing seat hole) and the inner race (or outer race), and friction will cause the bearing to heat and vibrate.

When the interference between the NSK bearing and the shaft diameter or the bearing seat hole is small, the press-fit assembly is often used. The easiest way is to use a copper rod and a hand hammer to strike the bearing races with interference fit symmetrically in a certain order, so that the bearing can be pressed in smoothly. In addition, a soft metal sleeve can be used to drive in with a hammer or press in. If the operation is improper, the seat ring will be deformed and cracked, or the hand hammer will be hit on the seat ring of non-interference fit, which will cause the raceway and rolling element to produce indentation or the bearing will be damaged indirectly.

B. Improper temperature control during assembly

When assembling NSK bearings, if they have a large interference with the shaft diameter, they are generally assembled by hot mounting. That is to say, the bearing is placed in an oil drum containing organic oil, and the outside of the oil drum is heated with hot water or flame. The process requires that the heating oil temperature is controlled at 80℃~90℃, generally not exceeding 100℃, and not exceeding 120℃ at most. After the bearing is heated, it is quickly taken out and sleeved on the journal. If the temperature is not properly controlled and the heating temperature is too high, it will cause the bearing to temper and reduce the hardness, and the bearing will be easily worn, peeled, and even cracked during operation.

The clearance of rolling bearings is divided into radial clearance and axial clearance. Its function is to ensure the normal operation and lubrication of rolling elements and compensate for thermal elongation. 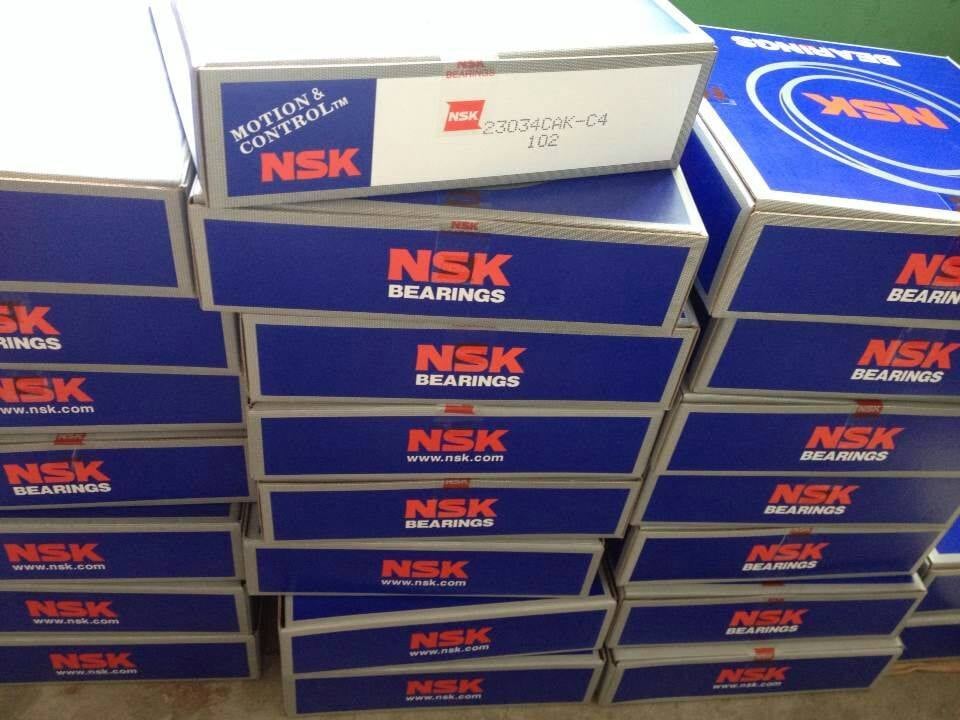 1) Under normal circumstances, there is no sound when the engine is running stably. When the engine speed changes suddenly, a dull "boring and boring" knocking sound will be emitted, accompanied by vibration.

2) When the engine load changes, the noise is obvious. The higher the speed, the louder the noise.

3) No change can be felt when a single cylinder is "frozen", but the sound will be significantly weakened when two adjacent cylinders are simultaneously misfired.

1) The clearance between the crankshaft and the journal is too large.

2) The clearance between the crankshaft and the axial direction is too large.

3) The bolts of the crankshaft bearing cap are loose.

4) Poor lubrication of the crankshaft bearing and journal causes the bearing alloy to ablate and fall off and cause noise.

6) The crankshaft bearing rotates relative to the bearing seat.