Inspection And Cleaning Of SKF Bearings

After the SKF bearing is installed, in order to check whether the installation is correct, it is necessary to perform a running check. Small machines can be rotated by hand to confirm whether they rotate smoothly. The inspection items include poor operation due to foreign objects, scars, and indentations, unstable torque due to poor installation and poor processing of the mounting seat, excessive torque due to too small clearance, installation error, and seal friction, etc. Wait. If there is no abnormality, power operation can be started.

Large-scale machinery cannot be rotated manually, so immediately cut off the power after starting without load, and the machinery is idling. Check for vibration, noise, and contact with rotating parts. After confirming that there is no abnormality, enter the power operation.

The power operation starts at a low speed with no load and slowly increases to the rated operation under the specified conditions. The items to be checked during the test run are whether there are abnormal sounds, changes in SKF bearing temperature, leakage or discoloration of lubricants, etc. If an abnormality is found, the operation should be stopped immediately, the machine should be inspected, and the bearing should be removed for inspection if necessary. 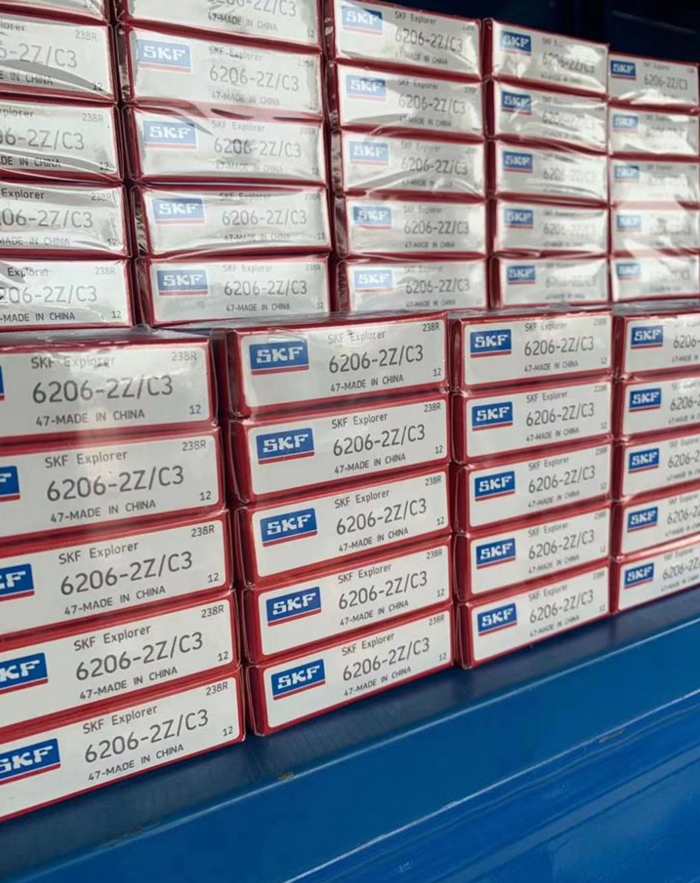 Common faults of SKF bearings are as follows:

2. Strain on the journal surface: there are iron-based cutting abrasive particles or black oxide particles in the iron spectrum, and there is a tempering color on the metal surface.

3. Corrosion of journal surface: Spectral analysis found that the concentration of iron element is abnormal, there are many sub-micron particles of iron in the iron spectrum, and the moisture or acid value of lubricating oil exceeds the standard.

5. Fretting wear on the back of the tile: Spectral analysis found that the iron concentration is abnormal, there are many sub-micron wear particles of iron in the iron spectrum, and the lubricant moisture and acid value are abnormal.

Under liquid lubrication conditions, the sliding surface is separated by lubricating oil without direct contact, and friction loss and surface wear can be greatly reduced. The oil film also has a certain vibration absorption capacity.

According to the use time, the motor should be cleaned and refueled after 2000 hours of use. There are two cleaning methods for SKF imported bearings:

1. Hot oil cleaning method. Due to the long-term use, the imported SKF bearings hardened by soft dry oil or anti-rust paste should be immersed in hot machine oil at 100-200℃, clamp the SKF bearings with pliers, and clean the SKF bearings with a brush Oil on the surface. The soft dry oil or anti-rust paste will melt when heated to 100-200℃, and it will be easily washed out from the gap of SKF bearings. Sometimes it is only necessary to shake the bearing several times in the oil. The oil will also flow away from the crevices.

When cleaning the centripetal spherical bearing of an old motor or an imported motor, the balls, the ball frame, and the inner ring should be rotated laterally from the outer ring and then immersed in hot oil. The rollers should also be cleaned when cleaning short cylindrical roller bearings. , Bead frame, inner ring and outer ring are separated.

During hot oil cleaning, the temperature of the oil should not exceed 20°C. If you use an open flame to heat directly, you should pay attention to prevent the oil from burning. SKF bearings should be suspended in the oil pan. The sinking of the bottom will cause overheating and reduce the hardness.

2. General cleaning method Put the SKF bearing in kerosene for 5-10 minutes, pinch the inner ring with one hand and turn the outer ring with the other hand, the dry oil or anti-rust paste on the SKF bearing will fall off. Then put the SKF bearing in relatively clean kerosene, scrub with a soft brush, wash the balls and the oil in the gap, and then put it in gasoline for cleaning once, take it out and put it on a clean paper. When cleaning radial spherical ball bearings and short cylindrical roller bearings, the balls, ball cage, inner ring and outer ring should be separated for cleaning.

The SKF bearing mounted on the shaft is cleaned mainly by spraying oil or spraying with a grease gun. The oil that is easy to be cleaned should be kerosene and then gasoline; the oil that is difficult to clean should be sprayed with hot engine oil at 100-200℃. Wash or spray with oil gun, then wash with gasoline. Be careful not to scrape the SKF imported bearings with sharp tools: hard grease or rust, so as not to damage the smoothness of the rolling elements and groove rings of the SKF bearing, wipe the cleaned SKF bearings with a clean cloth.