Whether the steel printing is clear: the brand name and label will be printed on the bearing body. The font is very small, but most of the products produced by the factory use steel stamping technology, and they are pressed before the heat treatment. Therefore, although the font is small, it is concave-deep and very clear. The fonts of counterfeit products are not only vague, because of the rough printing technology, the fonts float on the surface, and some can even be easily erased by hand.

Is there any noise: Hold the bearing body sleeve in the left hand, and turn the jacket to rotate in the right hand, and listen for the noise. Due to the backward production conditions of most counterfeit products, completely manual workshop operation, it is inevitable that sand-type impurities will be mixed into the bearing body during the production process, so it will make a noise when rotating. This is the biggest difference from a genuine factory brand that strictly enforces production standards and operates on machines.
Eric Bearing Limited has FAG Bearing 6205-2RSR in stock, contact us to buy it. 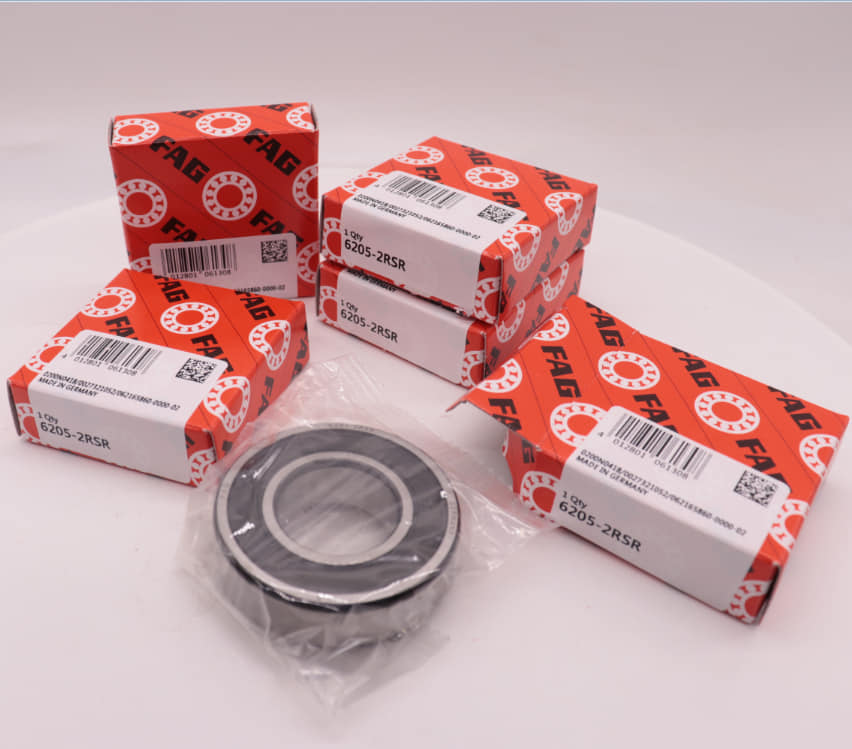 Whether there are muddy oil marks on the surface: this should be paid special attention when buying FAG bearings. Since the current anti-rust technology in China is not particularly home, it is easy to leave thick oil marks on the bearing body when it is anti-rust treated, and it is sticky-thick in the hand, and it is almost seen on the foreign original FAG bearings Less traces of anti-rust oil, but the attentive expert said that FAG bearings smelled, there must be anti-rust oil, but just can not see it.

Whether the chamfer is uniform: the so-called chamfer of the bearing, that is, the intersection of the horizontal and vertical surfaces, due to the production technology limitations, counterfeit bearings are not handled well at these corners.

The vibration caused by the deviation in the manufacturing process, the smaller the deviation, the smaller the vibration. The roundness, waviness and surface roughness of the surface of the steel ball are the factors that have the greatest impact on the vibration of each FAG bearing component, followed by the shape error and surface roughness of the inner and outer ring channels, and again the cleanliness and lubrication of the bearing Agent quality, etc.

Bearing fatigue failure is a surface form of failure, which is mainly manifested by the initiation, expansion and fracture of fatigue cracks, and the long-term effects of load failures produced under alternating metals. The cracks are in two ways:

The bearings sold by Eric Bearings Limited are of excellent quality, and the price is much cheaper than other distributors. The products are exported to more than 100 countries and regions in the world, winning wide acclaim from customers and establishing long-term cooperative relations with them. In order to expand the scope of business, we also hope to establish trade relations with more customers and develop together.
Pre：Intrinsic Noise Of FAG Bearings
Next：Causes Of SKF Bearing Vibration Damage