Many mechanical failures are related to the rolling bearings in rotation. The quality of the bearings has a great impact on the working state of the machinery. Its defects can cause abnormal vibration and noise in the equipment, and even damage the equipment in severe cases. The correct condition monitoring and diagnosis of rolling bearings is an important aspect of equipment optimization management and predictive maintenance of modern enterprises.

Corresponding to the structural composition of rolling bearings, rolling bearings have four types of common failures: cage, rolling element, bearing outer ring, and bearing inner ring. There are special mathematical calculation formulas for obtaining the fault frequency of these bearings, but the calculation is more troublesome in actual work. In daily use, the four problem stages that can be distinguished based on experience and testing are:  SKF Bearing 6203-2Z online, click here for more information about it. 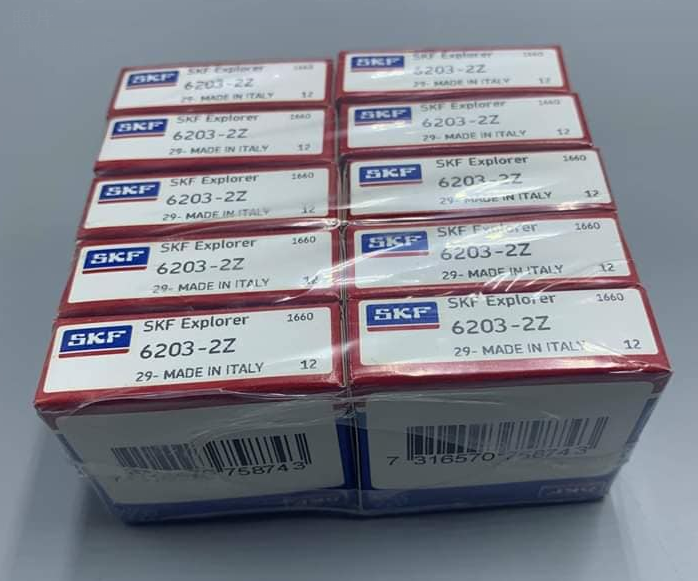 The first stage is the budding stage where the SKF Bearing begins to fail.At this time, the temperature is normal, the noise is normal, the total amount of vibration speed and frequency spectrum are normal, but the total amount of peak energy and frequency spectrum have signs, reflecting the initial stage of bearing failure. At this time, the real bearing failure frequency appears in the ultrasonic section about 20-60khz range.

In the third stage, the temperature rises slightly, noise can be heard by the ear, the total amount of vibration speed increases greatly, and the bearing fault frequency and its harmonics and sidebands are clearly visible on the vibration speed spectrum, and the noise level is obvious on the vibration speed spectrum. With the increase, the total amount of peak energy becomes larger than the second stage, and the spectrum becomes more prominent. At this time, the frequency of bearing failure appears in the range of about 0-1khz. It is recommended to replace the bearing at the later stage of the third stage, then the rolling bearing failure characteristics such as wear that can be seen by the naked eye should already appear.

As for the identification of the late stage of the third stage of bearing failure development, it needs to be comprehensively considered based on the above theoretical characteristics combined with the actual temperature, noise, speed spectrum, peak energy spectrum, the total trend of speed and peak energy and actual experience.

If you want to extend the use time of SKF bearings, the last method is to pay attention to it at all times. When the sound and temperature are abnormal during operation, you must be alert in time and make appropriate countermeasures. Eric Bearing Limited provides famous brands like NSK, FAG, SKF, etc. If you have purchase needs, please click here to visit our website.